On-site warehouse available for ease of pick up. 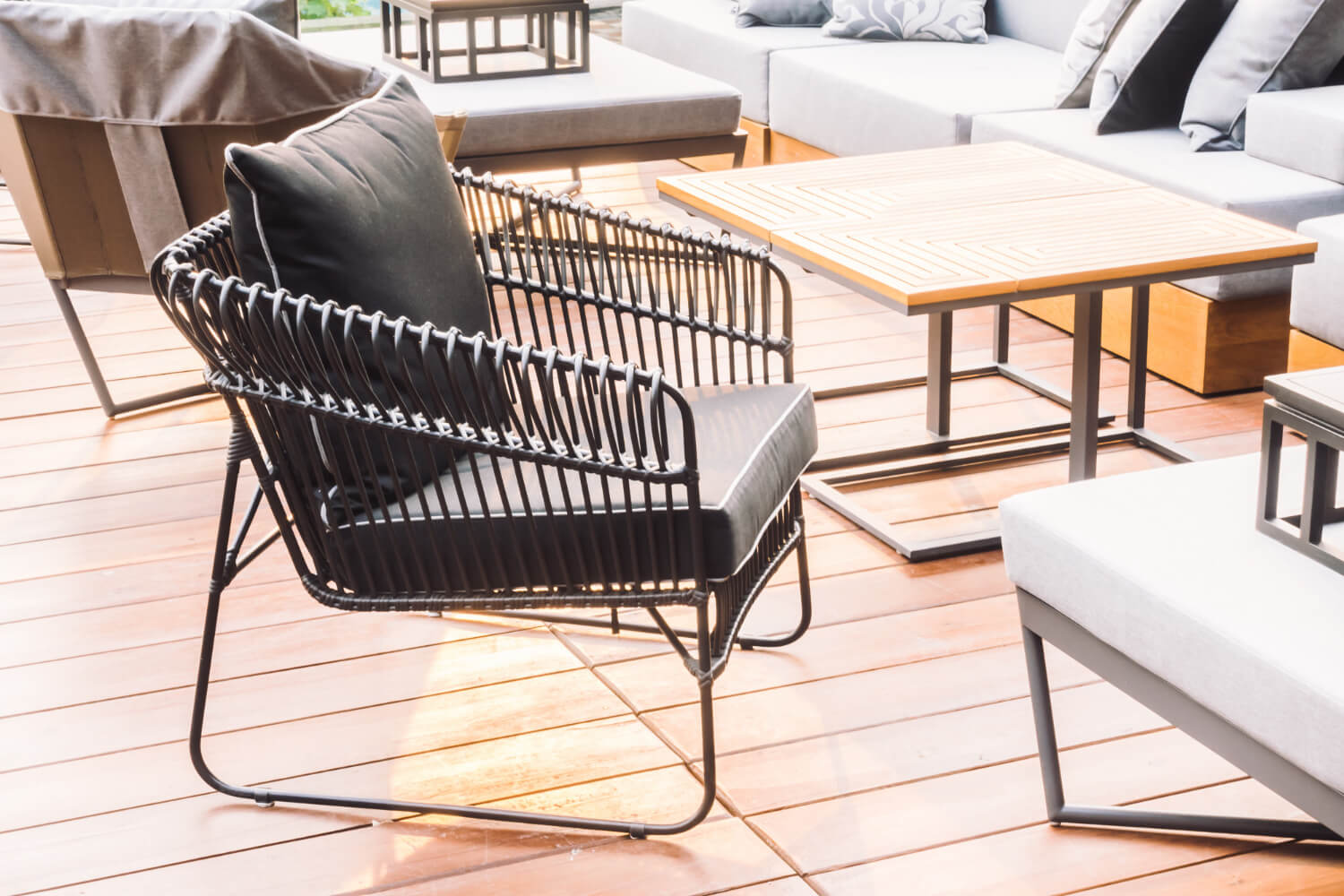 About Houston Home Patio in Pearland

Pearland sits on the southeastern edge of the state of Texas. Most of the city is in Brazoria County, although portions also extend into Harris and Fort Bend counties. It’s part of the Houston-The Woodlands-Sugar Land metropolitan statistical area, which has over seven million residents. More than 90,000 people live within the Pearland city limits, marking a significant growth in population. Between 2000 and 2010, it became the fastest-growing city in the metropolitan area, also called Greater Houston, and the state’s second-fastest-growing city. At Houston Home Patio, we offer patio furniture in Pearland, Texas, and much of the surrounding area.

Find out what our Pearland, TX clients have to say about our Patio Furniture

We've had the opportunity to work with the Home and Patio to furnish outdoor living areas for two homes and have always had great experiences! The staff is very friendly and extremely knowledgeable about their products. We highly recommend Home and Patio to anyone in Houston and around the country. They also stand behind their products and help with any issues that should arise. We will definitely continue to use them for all our outdoor living area needs.

We find that their entire staff has a commanding knowledge of all their product lines, and are extremely helpful in their furnishing and decorating suggestions. In addition to being great folks to buy furniture from, they also offer excellent repairs and service. Thanks to Houston Home and Patio, we love our outdoor living spaces!

Home and Patio is one of the best stores I have EVER done business with! It is family owned and operated and service is their priority! Everything I have ever ordered or purchased from the store has been wonderful. If something comes in wrong or isn't the quality Home and Patio demands they make it right EVERY TIME !! The service I have received is way beyond exceptional. -

We have an extensive selection of furniture available in our showroom and warehouse, which is easily accessible from Pearland. Our furniture categories include: 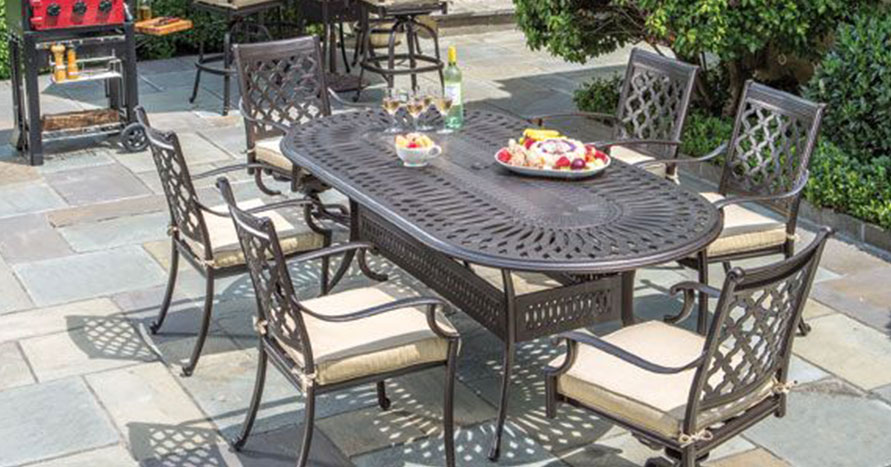 Dining outdoors can be a fun way to spend time with loved ones while enjoying the beautiful climate. You need the right furniture to be able to dine comfortably on your deck or patio, and our selection of outdoor patio furniture includes dining options to accommodate all needs and desires. If you want to enjoy cozy and intimate dining, check out the bistro tables that can seat two people. When you have more space and want to feed a crowd, a larger dining table is a better option. We have tables that can seat up to 12 people comfortably. All of the outdoor dining options we offer are made from durable materials that can withstand exposure to the elements.

When you want to relax in style and comfort, a chaise lounge is a must-have for your outdoor space. Some of the chaise lounges we offer are adjustable, allowing you to change your seating position based on your desires. The selection at Houston Home Patio includes sling, armless, and padded styles, as well as rounded chaise lounges that can be placed next to a pool or water feature.

Adding an accent table or other high-quality patio furniture to your patio or deck can extend your living space and make it more functional for those who use it. Accent tables are designed to enhance the overall appeal of a space and serve a functional purpose, and the options we have in our furniture store in Houston will exceed your expectations. If you like upscale design elements, be sure to look at the marble-top tables that we offer. These and other outdoor accent tables are designed to complement the other furnishings in our collection.

It’s tough to beat the appeal of a rocking chair, and you don’t have to limit that appeal to your indoor space. Houston Home Patio offers high-quality rocking chairs that are meant to be placed outside. They’re made from durable materials that can withstand exposure to the elements while providing a comfortable place to sit back and relax. You can find options that look like Adirondack chairs, as well as styles that more closely resemble a traditional indoor rocking chair. 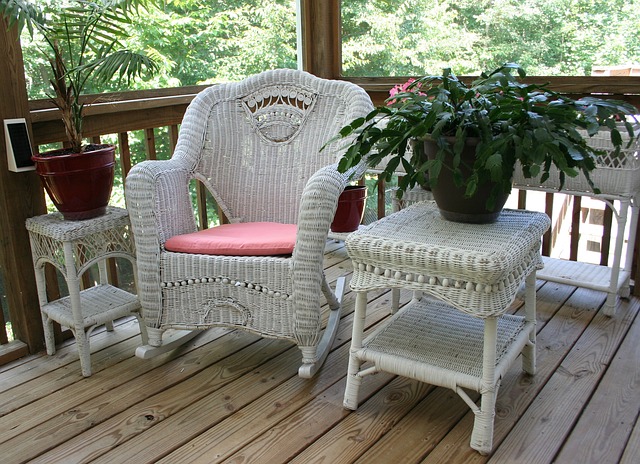 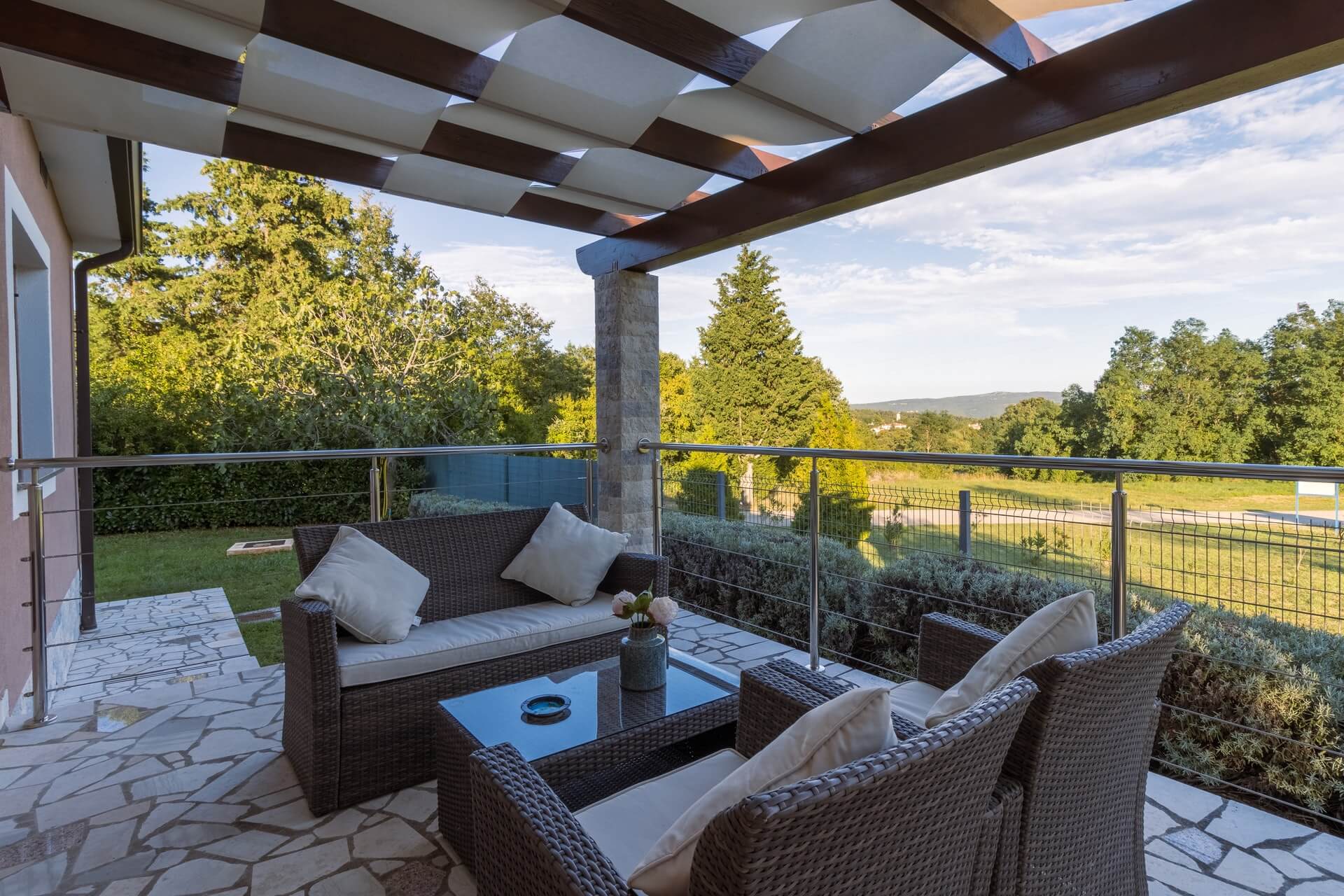 If you want to create a comfortable outdoor atmosphere, having seating areas is essential. It’s tough to relax and feel at home when you or your guests don’t have a place to sit down. Our outdoor seating options are expansive, accommodating all types of styles and preferences. You can get an outdoor-rated loveseat or sofa to create an indoor-inspired living space beneath the sunshine and stars. These outdoor seating pieces often come with patio furniture cushions that will make them even more comfortable. Whether you’re catching up with a friend or enjoying some time to yourself, you’ll love having a soft place to land on your deck or patio.

A hammock is often seen as a symbol of relaxation, comfort, leisure, and summertime living. You don’t have to go camping to experience the joy of relaxing in a hammock, as our selection of patio furniture includes hammocks in a range of styles. Grab your favorite reading material and choose a tufted, quilted, rope, or soft-weave hammock from our collection. You can also get a seat-style hammock that hangs from a sturdy tree branch and allows the user to sit up, rather than lie down. Some of our hammocks also include stands, which you can use if you don’t have two trees that can bear the weight of a traditional hammock.

If your outdoor space includes a kitchen with a bar or you select a bar-height table, adding outdoor-rated barstools can provide more seating. Outdoor barstools differ from those designed for use inside the home in a few ways. The first is the materials out of which they are constructed, as some materials can’t withstand constant exposure to changing climate conditions. Another difference is the height, as some indoor countertops have a different height than those used outdoors. When shopping for barstools, be sure to measure your counter height to get options that will provide comfortable and functional seating.

A glider or swing is a great addition to a porch, patio, or deck. Relaxing on a porch swing or patio glider can help you feel more relaxed and comfortable, especially if you’re sitting back and watching your kids play or chatting with loved ones.

If you want your outdoor furniture to be a little more durable, consider options made from polymer. This high-density polyethylene material often includes recycled elements and is made into colorful and visually appealing tables, chairs, and other outdoor pieces. 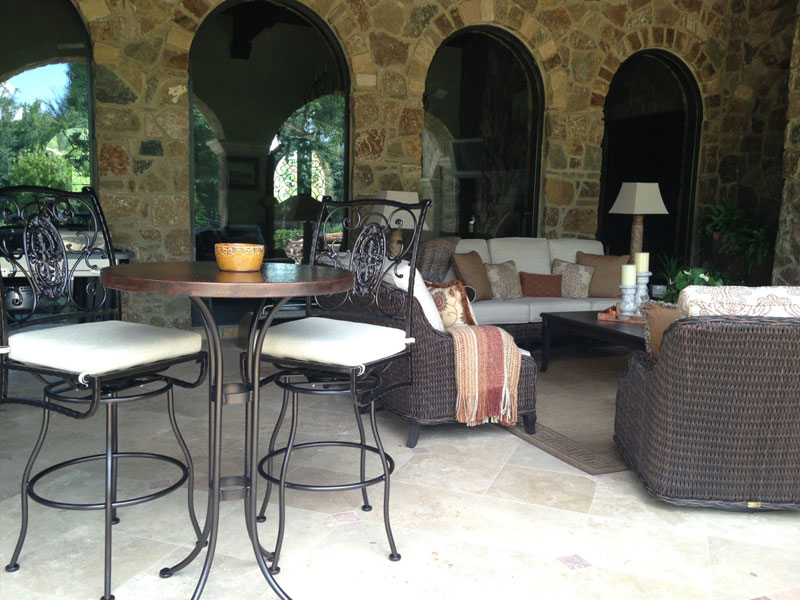 In addition to our selection of furniture, we also have appealing additions that can make your outdoor space more functional and inviting. You can even add options that will help you maximize your outdoor time throughout the changing seasons. 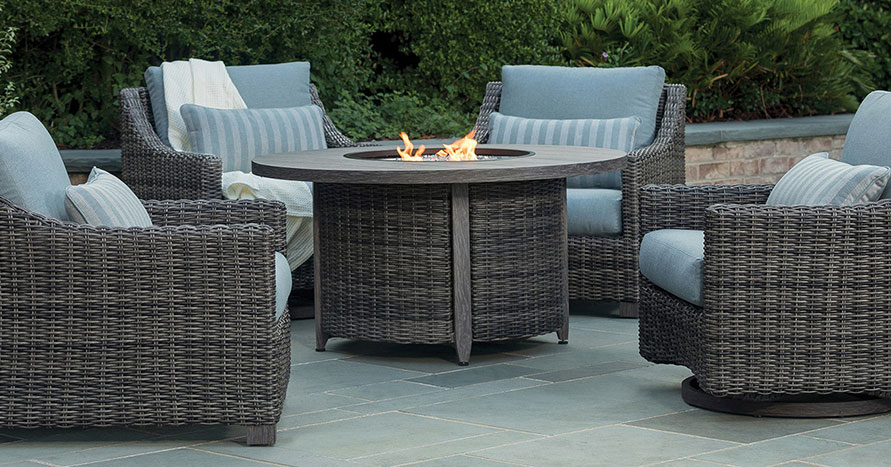 Although the temperatures in Pearland don’t drop too low, it can get chilly when the sun goes down. Make the most of your outdoor space throughout the changing seasons by adding a fireplace or fire pit. You can easily light a fire when it’s chilly outside and continue to enjoy this space without getting too cold. Our selection of fire pits and fireplaces includes gas-powered options that won’t produce unpleasant smoke or require the use of firewood.

When the sun is shining brightly in the sky, an umbrella over your seating area can create a more comfortable space. Our selection includes premium umbrellas that can accommodate various table sizes and shapes. You can also tilt most of our umbrella options to block out the sun based on its position in the sky.

Furniture Trends in Pearland for 2022

Pearland residents can incorporate stylish yet functional outdoor furniture pieces in their yards to create more appealing spaces to enjoy. One of the current trends in outdoor decoration is incorporating earthy, warm tones in the design. Furniture pieces made from durable wood and wicker can help you incorporate this trend into your outdoor space design. Many local property owners also enjoy entertaining outdoors. Pearland is the perfect place to do so, as long as you have furniture that encourages guests to sit back, relax, and stay awhile.

Whether you’re looking for a patio furniture set or a few pieces to add to your yard, Houston Home Patio is the place to shop. We offer:

Furnishings that are faded, worn, or ripped aren’t appealing, but our experienced technicians can perform repairs to make them functional once again. We specialize in the repair of sling furniture and can provide care instructions to help you keep your furniture in good condition for years to come.

Along with our selection of furnishings and additions, we also carry decor items that can help you update your outdoor living area. You can pick out stylish outdoor throw pillows, clocks, thermometers, lamps, rugs, and furniture covers.

When you live in an area blessed with a moderate climate throughout much of the year, you probably want to take advantage by spending time outdoors. The right outdoor space can make it more appealing to be outside, and creating a space that appeals to you and your loved ones often involves adding stylish and functional furnishings. If you’re in the market for patio furniture, check out the selection at Houston Home Patio. We provide high-quality furnishings to buyers located in and around Pearland, Texas. 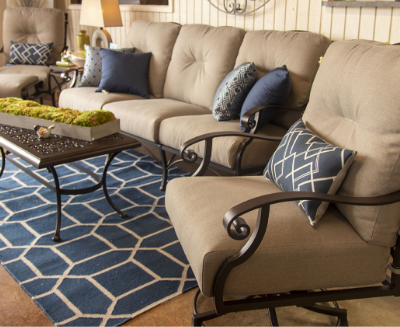 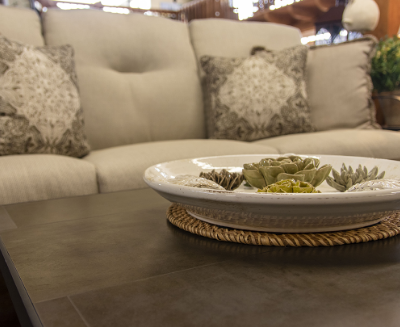 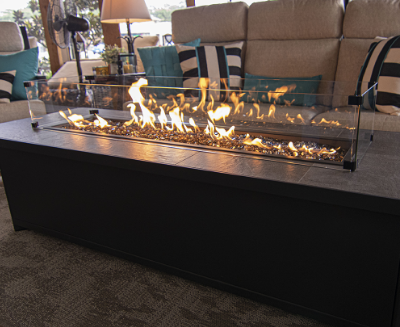 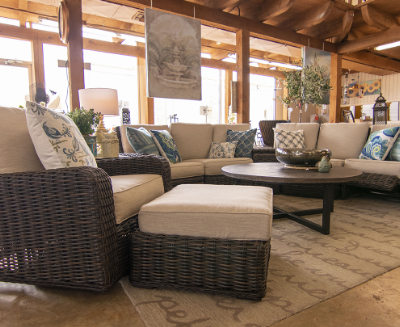 Find Patio Furniture Near You 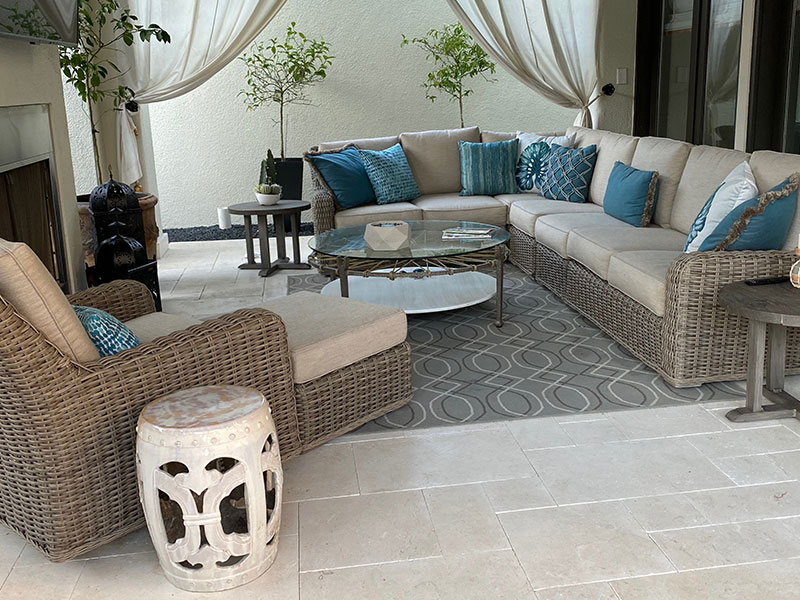 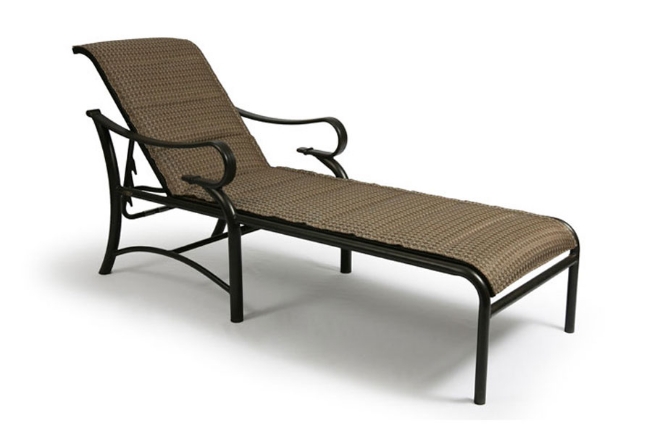 Do You Have Sling Furniture?
Is it Ripped, Worn or Faded?

Choose From Over 100 Fabrics

We Also Have Replacement Cushions!